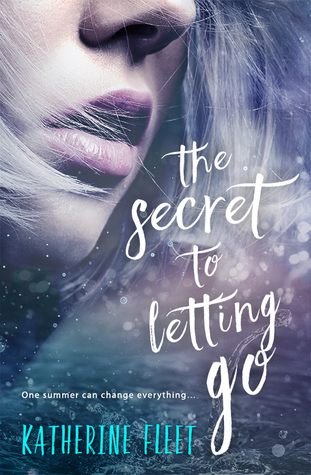 Title: The Secret to Letting Go

One summer can change everything…

Haunted with guilt after his girlfriend’s death, Daniel Hudson has no interest in committing to anyone. At the end of the summer, he’ll be leaving Florida for a new start in college. If only he could avoid the mysterious new girl in town, who seems every bit as naive and eccentric as she looks. Trouble is, she’s hard to ignore, with her beautiful piercing eyes, pitiful-looking dog, and unsettling tendency of finding trouble.

Clover Scott lived her whole life off the grid and arrives on the Gulf coast in search of her grandparents. She never expected to nearly drown, or get caught in a hurricane, or fall in love with the boy who rescues her. Now, she has a chance to rewrite her life’s story, to finally fit in somewhere, but Daniel wants answers about her past. When the police start asking questions about the disappearance of her parents, she must make a choice: go to jail or confess her secrets—even if they might destroy her chance at a happily-ever-after.

Hi all! I just finished reading this book and here I am writing this review- already! I usually give myself some time to think about the book and my thoughts on it, but this time is different because I already have my thoughts sorted out and I know exactly what to say. So, let’s get on with it!

If you’re new to my blog, you should know that I just can’t stay away from Entangled Teen books. I was drawn to The Secret of Letting Go the moment I saw its cover and read the blurb. (Because YA with some mystery and published by Entangled is so on. So on. Pretty cover’s just a bonus, guys.) 😀

I feel like this is a book you need to go into not knowing much, so you can properly enjoy the surprises and plot. What you need to know is that this book is beautifully written and will suck you in like a vortex. The writing while straightforward, is beautiful in an effortless way. The story alternates between Daniel and Clover in first person POV every few chapters or so.

Clover is unlike any character I’ve encountered before. She had her share of secrets and lies but she when it came to things not related to her past, she was so honest and straightforward. She didn’t see the need to lie about the way she felt or beat around the bush when she wanted to know something. Whether it’s about kissing or her feelings, she’ll just come right out and say what’s on her mind, often putting others on the spot. Having grown up the way she did, she was also pretty clueless about boys and social events. So she often spoke about those matters in a somewhat innocent manner. It was so refreshing to see the world the way Clover did. With innocence, wonder and compassion- unjaded by her past.

Daniel on the other hand is the exact opposite. He had the tendency to overthink and complicate everything. He liked to see things logically and was tinged with sadness after his girlfriend’s death, which he blamed himself for. I feel like he ran a bit hot and cold throughout the book but like he said, he’s not perfect and you can tell he put it a lot of effort. He had his own demons to face but he was always ready to defend/save Clover. Like Clover he has his flaws but that just makes them more believable.

Together, Clover and Daniel made a perfect team. They had a lot to teach and learn from each other, which they did. Clover changed the way Daniel saw and did things. She taught him to see and savor the finer things in life. Together, they lived in the moment until they couldn’t and had to face what was coming. Their relationship isn’t an easy, rosy one but it’s realistic and so are the choices they make.

Not only was I invested in the main characters, the supporting characters also had my attention. I loved Amelia, Daniel’s twin sister, who is the opposite of him with her tendency to act before thinking. I am now convinced that Amelia and Sam, Daniel’s best friend, need their own book because I need more of their relationship. Make it happen, please!

This book keeps you guessing what’s going to happen next and exactly what happened in the past. It’s like a puzzle and you’re given pieces of the puzzle gradually, so you have to connect the dots as you go and maybe you’re right, maybe you’re not. The only way to know is to keep reading.

Kudos to Katherine Fleet for keeping it real. I realised there were a lot of times where she could have taken the easy way out and just handed us a HEA, but she didn’t. She made it realistic, even if that meant asking the hard questions and going the long way. So you get full closure and nothing’s left unresolved.

One of the matters this book addresses is our habit of taking things for granted. To be honest, we are all guilty of that crime. We get so used to our luxuries and having our family and friends around that we stop appreciating them like we should. Seeing Clover and how foreign basic things are to her and the thrill of having loved ones, it makes you grateful for what you have. I just wanted to hug everyone after reading this book.

Overall, The Secret to Letting Go is a story about facing your fears, putting the past behind you but not hiding from it, and sacrifice. It’s fast paced and hooking so you will not be able to put it down, nor will you want to. I know I was hooked to it from the start to finish, and read it in one sitting, ignoring the rest of the world but only temporarily. I highly recommend this book to everyone. We can all learn a thing or two about life from Clover and Daniel.

We can’t change the past. All we can do is move forward.

That’s it for this review. I hope you enjoyed it and consider checking out The Secret of Letting Go because it truly is an exceptional book. If you’ve already read it, how did you find it? Chat with me in the comments! Hugs. ❤